How much can you spend?

Select the features that you need

Or
Compare this socks Find another socks

What I learnt during my 5am trike adventure

Share
My daughter sleeps late. I'm lucky. But now and then she'll wake up at 5 am, and because it's so rare, I think it hits me harder. (Parents of children that wake up early every day will probably want to slap me around now...)
Anyway. One morning. She woke up at 5 am. I tried to ignore her for a few minutes, hoping she'd go back to sleep. But nope, the chatting became crying, and that was it, she was awake. Time to play. Apparently.
It's incredible, I can feel like death trying to get out of bed, and the second I see her little smile growing as I enter her room I find strength. Lie. I still feel exhausted.
It's 5 am, of course, I'm tired.
Well, this morning I had a random idea - let's go out for a walk, in your trike.
She giggled with excitement, and I felt like the coolest mum in the world putting on her shoes and jacket for a real spontaneous trike adventure! We started out the door, and I discovered something...
5 am walks are amazing. 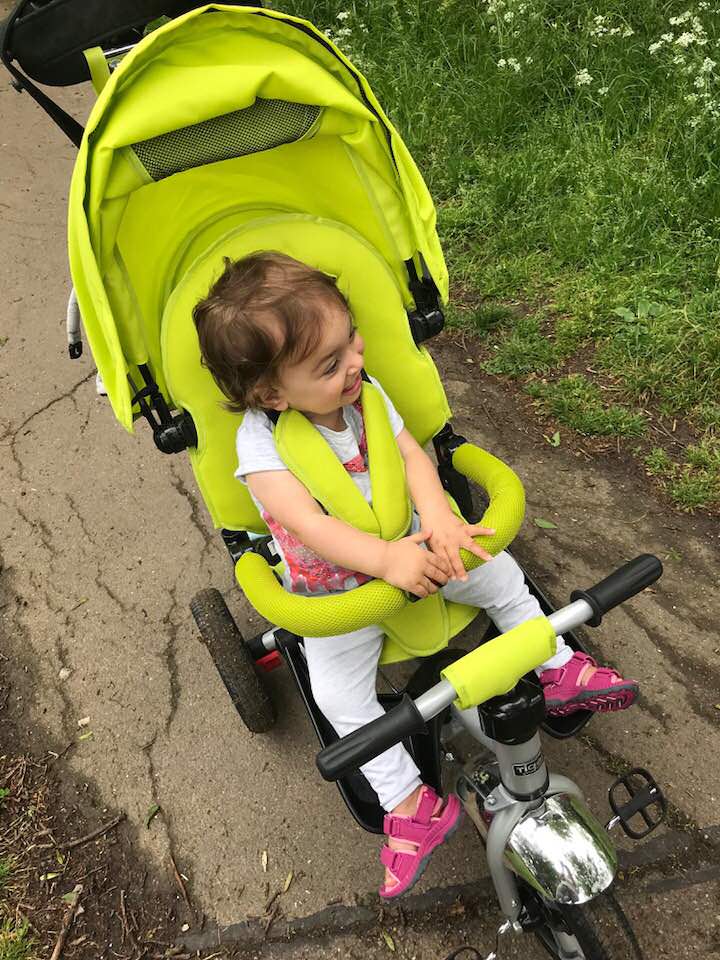 The streets are quiet, and there are no cars, it's light outside already (summer walk, phew). Some people are walking their dogs already to my daughter's delight. We stop at every flower & every tree, and it's a gorgeous day.
It's different from her pram because she's not as covered up, she's part of the world when she's in her trike. Without even realising it, we've been walking for 90 minutes.
Ten minutes before we get home, I peek over the sunroof (which I've done every 5 minutes anyway to smile at her and remind her I'm there). She's fallen asleep.
In her pram, that'd be fine. I would fully recline the pram and keep walking. In her trike that's not a great idea. My trike does have a recline option, but I don't think it's meant for sleeping. So I unbuckle her and lift her up into my arms. She's now half awake but still slumps on me. I start to push the trike the rest of the way home, holding her with my other arm.
Did I mention, I'm six months pregnant?
It made me realise how important good steering handles are, and also the lightness of the trike.
Later, I realised that the trike has a parent facing mode. On future walks (hopefully not at 5 am) I'll be swivelling her round to face me if I think she's getting tired so I can catch her before her head falls.
Just another reason to love her trike!

Hot pink for hot days in your trike. Your tiny human will love getting...

Parenting is about many things, including passing on great memories and teaching skills outside of academics. For many parents, nothing compares to the feeling of teaching your children how to ride a bike.

When starting early, trikes offer children an opportunity to ease into the process. Smart trikes from various brands are getting more and more clever on how to produce trikes that can be used by younger children. Toddlers can enjoy trikes and now, even babies.

Parents ourselves, we developed WhichTrike to help you to easily search and compare trikes. Common feedback we get is that without our platform, parents wouldn’t have even known that trikes have so many different options and made more impulsive purchases.

We hope that you will find WhichTrike helpful in your search for your kids first trike and that you go on many adventures, creating happy family memories on the way.

Looking for your trike-soul-mate? Read Our Trike Love Stories series